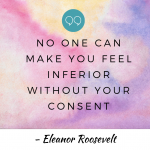 I recently had a conversation with a brilliant, smart, charming young lady, let’s call her Angie.

During our conversation, Angie mentioned that she could not get rid of the negative words a colleague, who is also a friend, said to her.

Their friendship had gone sour and in their last conversation, this friend said to Angie words close to “You will never succeed without me. You just watch. You’ll come back begging for my help.” Angie was taken aback and could not believe that her dear friend thought so little of her to say these words.

It’s been a couple of months since this happened. And unfortunately, Angie can’t stop thinking about what her friend said. She confessed to being anxious that it would all come true. And that she could not shake off the feeling that disaster was just around the corner.

Unbeknownst to her, Angie is living her life looking for evidence of what her friend said would happen. She does not realise that ‘where her focus goes is where her energy flows’ and that in choosing to focus on her friend’s words, Angie is creating the eventuality.

To protect herself from being a ‘victim’ of her friend’s negative words about her, Angie would have had to reject those words as soon as she received them.

This is because the subconscious mind is very suggestible and will accept anything it receives if not questioned. The subconscious brain absorbs the new information and internalises it. It then works hard to align one’s self-concept with this new information by focusing on it and finding evidence that it is true.

Accepting the negative words without challenge is setting Angie up for failure – failure that will be of her own making!

So, we had a chat along the following lines:

Remember, no one can make you feel inferior without your permission.